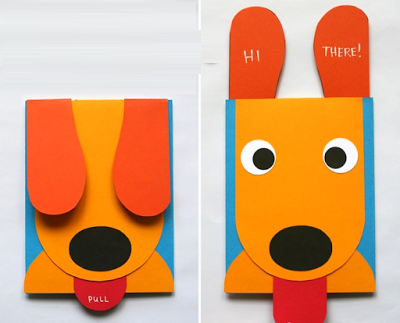 1. Download the PDF template, open it, and follow the directions on the template to print on your card stock.
2. Score and cut out all the pieces as directed on the template. "Scoring" is simply making a dent in the paper so it folds easily. I use a ruler and the back of my craft knife* (not the sharp side) to score. You can also use a regular ol' table knife (the kind you use to spread butter on bread) to score the folds. Keep the extra uncut pieces to make a card in opposite colors later! *Get a grown-up involved if you are using a craft knife. It's sharp!
3. Cut the white piece of card stock in half so that you have two pieces that are 5.5 x 8.5 inches. Fold them in half. You'll use one for this card and have an extra to make another card later.
4. Glue the tongue to the ear piece. Note the writing is facing up on the ears and facing down on the tongue.
5. Glue the semicircle to the bottom of the blue piece, flush with the bottom edge. Note the text is face down on both pieces.
6. Feed the tongue through the slit from the back.
7. Put glue only on the top and sides of the text side of the head and center it flush against the top edge of the blue.
8. Punch two white 1 inch circles and two black 5/8 inch circles. Make eyes by gluing the black onto the white. Then glue the completed eyes on, being sure they are in a spot that is hidden by the ears when they are folded down.
9. Use a template piece to trace a nose on black paper with pencil. Cut it out and glue to the face.
10. Fold over the blue side flaps toward the back and crease them well.
11. Add glue to the back side of each flap, then attach it to the front of the card you made in step 3. It's easier for me to add the card to the back of the puppy instead of the other way round, but be sure you have the card opening on the correct side.
12. Open the card and fold over the yellow flap between the ears and glue it to the inside cover of the card.
13. Test the ear action! Pull the tongue down and watch the ears flip up! Push the tongue back inside and the ears can fold back down.
14. Using a gel pen or thin magic marker (not a permanent marker - those may bleed through your paper), add the word "PULL" to the lower part of the tongue that shows when the ears are laying down.