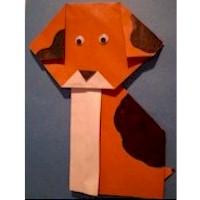 1. Fold and crease paper diagonally in both directions. Open up.
2. Fold top point down toward the back. Fold bottom point up toward the front. Fold both side points in.
3. Fold in half.
4. Fold sides diagonally down to form ears. Fold tip of nose down.
5. Draw on eyes or glue on wiggle eyes.
6. Fold second piece in half diagonally.
7. Open slightly along right side. Fold top piece out which will bring the top point down.
8. Fold right side point ot middle.
9. Fold point diagonally back to form tail.
10. Open up head and glue inside.